The body content of this book, kept in print through iUniverse, is the same as the 2001 edition (below). There is a new Prologue covering the political, legal, and legislative changes that occurred since the first edition, as well as new health information and website contacts. Includes information on smart grid technologies and the latest cell phone and infrastructure concerns. 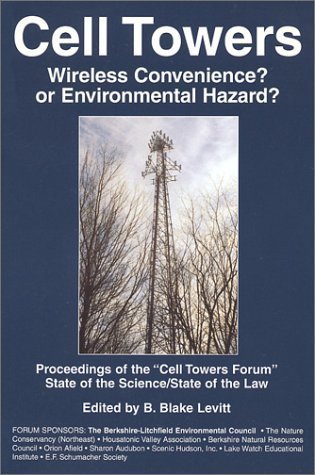 Click here to
order online! There are a few first editions left

Cell Towers: Wireless Convenience? or Environmental Hazard? Proceedings of the “Cell Towers Forum” State of the Science/State of the Law

Cell Towers. They seem to be popping up everywhere, like intergalactic mushrooms. We see them inappropriately placed in residential neighborhoods, on school grounds, on pristine ridgelines, along beautiful country roads and scenic highways--usually over the vehement objections of neighbors, parents, and environmentalists.

Towers are often reluctantly sited in these hallowed places by the very people we have elected to protect our communities.

Many of our municipal agents have been intimidated by an onerous provision in a federal law--called Section 704 of the Telecommunications Act of 1996, and by an aggressive telecommunications industry which threatens to sue at the hint of a rejected application. Towns, fearing staggering legal bills, have come to think their hands are tied and that somebody’s neighborhood must be sacrificed for the sake of the larger community.

But with so many new antenna arrays needed to support more and more wireless buildout, everybody’s neighborhood now faces “sacrifice.” No neighborhood, scenic vista or historic structure is off-limits.

Municipal agents feel maddeningly frustrated and powerless in the face of a multi-billion dollar industry that appears to have Congress on its side. It is as if we have become candles in the wind of the wireless juggernaut, even though serious scientific uncertainty about the safety of this technology continues to exist.

No community is unaffected by cell towers today. Siting them is one of the most contentious areas of land-use law in America, as well as in many European countries where far more stringent exposure standards have been set for ambient environmental radiofrequency radiation--the area of the electromagnetic spectrum used for this wireless technology.

Just a few short years ago, this was not the case. Indeed, the rapacious buildout of this technology caught most communities completely by surprise.

How did we get to this place where we feel we have lost fundamental control over our most cherished right to protect the health, safety and welfare of our communities, and to preserve our property values? How real are health concerns regarding this technology? How can we restore our rights? What is reasonable to ask in light of the fact that many Americans want cellular service?

A one-day conference was held in Litchfield County, Connecticut, on December 2, 2000, featuring speakers with extraordinary expertise, to help answers such questions.

This proceedings book from that conference hopes to share that expertise with a broader audience. No community should be without this information because one thing is certain... Millions of people love cell phones, but no one loves the infrastructure needed to support a wireless, civilian phone system. New wireless technologies are already out of the gate--wireless TV, wireless computers, wireless faxes, wireless modems--to name a few. All will require additional spectrum and antennas with accompanying radiation--with no clear understanding of the biological consequences to humans or to other species.

It is imperative that we acquire far more wisdom in balancing the competing needs of those who want such services with those who do not want to live near the infrastructure, including the recognition that it may be time to fine-tune the technology away from ground-based networks altogether.

" Finally, a publication dealing with the very timely and important issues of cell towers. Following Levitt's excellent overview of the problem, the book takes us through relevant scientific and regulatory issues in a thorough, easy-to-understand manner. This is essential reference work for laypersons, as well as those in science, policy development, regulation, and legislation." --Jerry L. Phillips, Ph.D., Bioelectromagnetics consultant; former Research Scientist, Cancer Therapy & Research Center in San Antonio, Texas, and Pettis Memorial VA Hospital in Loma Linda, California.

“The continued proliferation of this radiation constitutes one of the most significant alterations of the natural environment, with the possibility of major impacts on human health. Ms. Levitt’s compilation of the presentations of the Cell Towers Forum along with additional scientific evidence, up-to-date regulatory provisions, and abstracts of pertinent legal decisions is unbiased, authoritative, and represents the opinions of recognized experts in the bioeffects of electromagnetic radiation. This book should be required reading for all planning boards, environmental groups, and concerned citizens.” --Robert O. Becker, M.D., Biomedical sciences consultant; author of The Body Electric (with Gary Selden) and Cross Currents, The Perils of Electropollution, The Promise of Electromedicine.

There is a new Back-in Print edition of this book with iUniverse in 2011. It includes a new cover and a new Prologue, updating the politics, legislation, and legal matters since 2001. The rest of the content is the same as the first Safe Goods edition.