To Order From Barnes & Nobel:
To Order From iUniverse:
To Order From Amazon:
Electromagnetic Fields, A Consumer's Guide... is considered the classic in the genre, covering everything from the earth's natural EMF background to all of our man-made artifacts today. 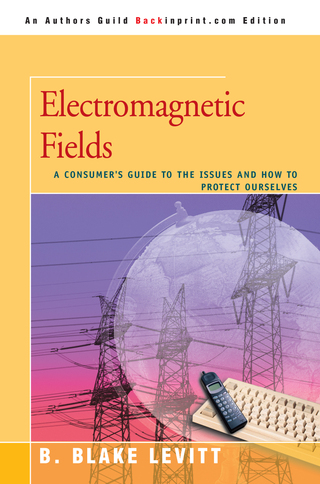 2007 iUniverse BackinPrint edition contains a new Foreword by the Author on the increasing ambient exposures from wireless technologies and their impacts on humans and to the environment.

Electromagnetic Fields: A Consumer’s Guide to the Issues and How to Protect Ourselves

Based on superficial media reports a few years back, many people think that the issue of safety regarding exposures to electromagnetic fields has been settled in favor of EMFs and that we have nothing to worry about. But nothing could be farther from the truth. Researchers in bioelectromagnetics and biophysics have continued to observe alarming studies across a range of frequency exposures that are common in our everyday lives, especially with wireless products such as cell phones, cell towers and wireless laptop computers. The American press is largely unaware of this new body of research, coming primarily from European countries.

The human race has never before in its evolutionary history been exposed to such fields on a continuous basis, and there are serious mounting concerns about the effects not just on individuals but on our entire ecosystem. Since the turn of the last century and increasingly since the early 1940’s with the development of radar during World War II, the rapid growth of radio, TV broadcasting, and especially the new wireless infrastructure needed to support all manner of wireless devices, has surrounded us in a veritable sea of artificially produced electromagnetic fields all with a presumption of safety that many now think should never have been made.

In the light spectrum alone, there is so much artificially generated light on earth today that a person can literally read outside at night in almost any major city. By anyone’s reckoning, that’s an altered environment and a nascent area of study has developed to look at the effects of light-at-night not just on humans but to other species as well, many of which are exquisitely sensitive to low-level electromagnetic fields. Many people who are born and raised in urban areas never get a real glimpse of natural starlight or experience the backlit silver luminescence of the winter landscape when there is snow on the ground and a full moon in a clear night sky. Instead, whole generations now experience night light as the grotesque red-orange glow of sodium-vapor street lights, the same color that used to alert distant neighbors that a huge fire had broken out.

A mere fifty years ago, none of this was so. The earth today is literally blanketed with a range of artificially generated frequencies throughout the electromagnetic spectrum. The radio/microwave frequencies have proliferated at an alarming rate and continue to do so, unchallenged by our regulatory agencies. And most environmentalists do not understand this for the serious, complex pollutant that it surely is.

“Other Authors have dealt with EMF questions, but none with the clarity and evenhandedness of B. Blake Levitt. This book avoids the extremes of over-dramatization and understatement and delivers the important information in a cool and lively manner.” --Andrew A. Marino, Ph.D., J.D., co-author of Electromagnetism and Life, and The Electric Wilderness

"If you are looking for the plain, unvarnished truth and the best available advice, this is one book you should not miss." --Robert O. Becker, M.D., Biomedical sciences consultant; co-author of The Body Electric (with Gary Selden), and author of Cross Currents, The Perils of Electropollution, The Promise of Electromedicine.